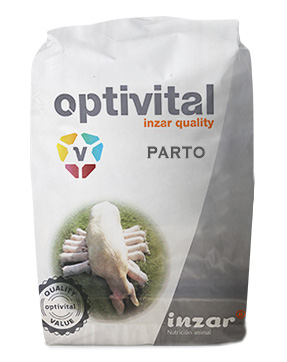 It contains in its composition vitamins, essential oils, W3 fatty acids, probiotics and additives that, among other functions, improve the release of calcium at the time of birth, facilitating its development.

It contains in its composition vitamins, essential oils, W3 fatty acids, probiotics and additives that, among other functions, improve the release of calcium at the time of birth, facilitating its development.

MATERIAL AND METHOD: The trial involved 100 hyper prolific Landrace * Large White genetics sows and were randomly classified, taking into account the delivery number, into two groups: a group treated with the OPTIVITAL PARTO product supplied for 4 days before giving birth and a control group with the normal feed of the farm. The duration of the birth, the number of total births, the number of live births, the number of dead births and the number of crushed piglets at birth were recorded as study variables.

RESULTS AND DISCUSSION: During the development of the test the treated sows had a faster delivery with an average duration of 2 hours and 55 minutes, that is, each piglet in this group spent an average of 13 minutes at birth. The control group (Table 1) was slower and the average duration was 5 hours and 15 minutes, that is, each piglet invested an average of 21 minutes at birth.
It is noteworthy that in the control group 14% of deliveries were registered with a duration of delivery greater than 5 hours, which would be associated with a greater depletion of the sow and therefore, a greater risk of perinatal mortality in piglets.
It is remarkable in terms of the characteristics of the litters born (TABLE 2) the difference in the% of dead births between groups with a higher% of dead births (8.7%) in the control group compared to the OPTIVITAL PARTO group ( 7.0%) as well as the difference in the number of crushing after birth, being 0.40 per litter in the control group compared to 0.07 crushed piglets per litter in the OPTIVITAL PARTO group.

CONCLUSIONS: In the test performed, the duration of labour was significantly lower for the OPTIVITAL PARTO group, this fact was associated with a greater vitality in the piglets of this group that saw reduced mortality and the crushing percentage in the first 48 hours after birth, therefore the application in the peripartum of a specific feed formulated from functional nutrients can be of great help in the development of birth, being especially of interest in hyper prolific genetics and in sows with greater number of births with a tendency to longer and problematic birth. 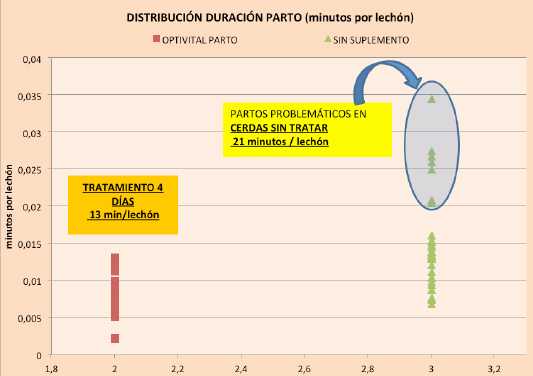 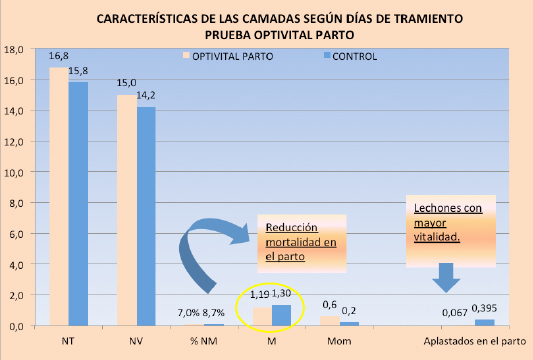 A cookie or computer cookie is a small information file that is saved in your browser each time you visit our website. The usefulness of cookies is to save the history of your activity on our website, so that, when you visit it again, it can identify you and configure its content based on your browsing habits, identity and preferences. Cookies can be accepted, rejected, blocked and deleted, as desired. This can be done through the options available in this window or through the configuration of your browser, as the case may be. In the event that you reject cookies, we will not be able to ensure the correct functioning of the different functionalities of our website. More information in the Cookies Policy section.
ACCEPTREJECTSETTINGS
Cookies Policy